i am having so much fun at bacon camp! the people here are very nice and there are lots of fun activities. there is no canoeing or archery or s’more making, but instead everyone has made yummy dishes out of bacon to share with each other.  i took some pictures so you could see all the cool things people are doing at camp.

this is a smoked pea soup with bacon bits and truffle oil in a bacon bowl made by steve.

i think i heard one of the judges say that it looks like baby vomit, but apparently it was pretty delicious.  even though i am only nine years old i already know that truffle oil = automatic tasty.

some people made very pretty and very complicated things, like this deconstructed BLT by simon with bacon foam and tomato chutney.  he also made a bacon old fashioned with bacon infused bourbon.

we are learning new things about other cultures here at camp! mariko made a traditional japanese dish called kakuni, a braised pork belly with soy sauce, ginger, green onion, and sake. 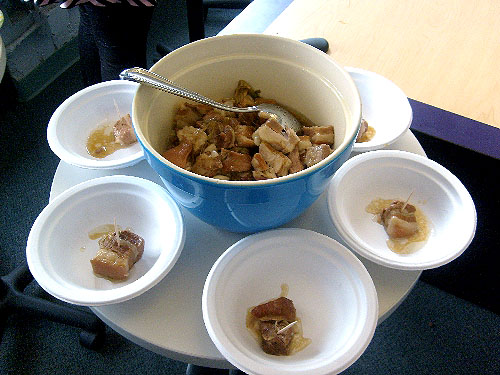 a lot of people made bacon dessert dishes like this plate of three kinds of chocolate covered bacon – plain, peanuts, and poop coffee beans! ew! gross! poop is funny. 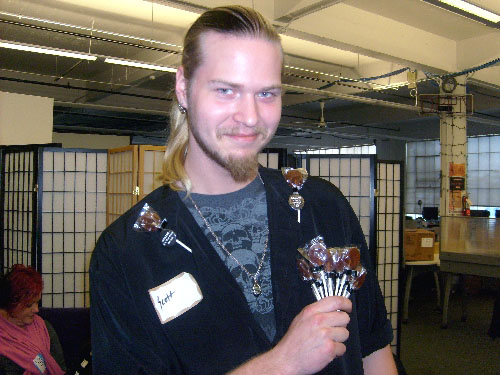 if you’re worried about me making friends here at bacon camp, don’t worry. i met a very nice lady named laura, who made bacon-wrapped meatloaf: 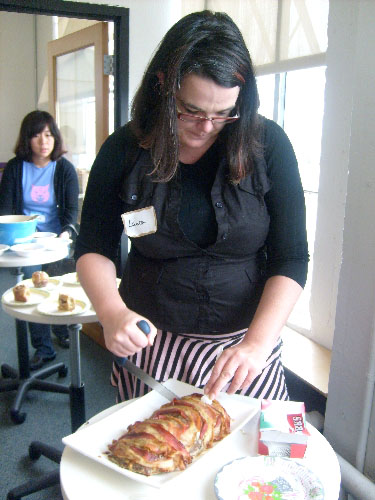 don’t worry mom and dad, there was non-food related stuff too. you won’t need to send me to fat camp next year.  we learned stuff about SCIENCE! ani made a bacon hypercube, a bacon mobius strip, and bacon tetris!

people are also doing arts and crafts, like these funny bacon eggs that are really cool but also make my tummy feel kind of gooshy inside:

they were even making special bacon camp t-shirts! here is quinn the screenprinter, looking like a bacon ninja:

there were lots of other cool t-shirts at bacon camp! pigs and bacon love all over the place.

the one on the top right is the screenprinted t-shirt. here’s the seal of bacon camp, which i tried to get on a t-shirt until the screenprinting equipment got all FUBAR. 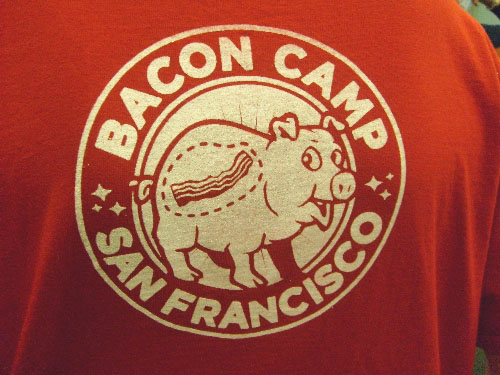 it is definitely a big pig product lovefest, but there is also a  serious competition going on. the judges are pretty tough! the deal is that you get a few minutes to present your bacon dish and then the judges critique with a score from 1-5, with one being a bacon disaster and a five being the ultimate bacon-y deliciousness. here is a picture of my final applewood smoked bacon and panko encrustifried avocado sushi with wasabi bacon mayonnaise presentation!

here’s someone presenting their chocolate covered bacon to the seated judges. you can also see amy, the mc in the cute dress and red heels, as well as all the people come to see the bacon!

there was also an audience popular vote, where people tried all the dishes and then put stickers on their favorites:

it was pretty intense for my hungover ass (yes, some nine year old campgoers get a little too drunk on tequila shots the night before heading off to camp) and overall, i would have preferred the whole affair to be more focused on tasting and appreciating all the incredible bacon creations rather than rigid numerical scoring.  i probably also should have conceived and produced my dish sometime before the morning of the competition, but i ended up getting pretty good scores and was happy with my showing.  there was lots of other general bacon love and some pretty funny presentations like this ‘one hour of bacon’, an overview of multiple bacon-related comments in a sixty minute span on twitter by the animated and bacon-obsessed rod begbie:

see, mom and dad, everyone around the world speaks the international language of bacon. overall, the whole day was a ton of fun, seeing all the inspired ways to use bacon and show your love for piggy deliciousness. i’m already excited to go back to bacon camp next year!