london! i’ve been here for just about a week now, and finally have some time to post. it’s been a battle against shoddy internet situations and the time suck of running full speed ahead into a towering wall of meticulously reinforced bureaucratic red tape. let’s just say that the process of setting up a business in another country is just a leeetle bit complicado.  however, it’s been an exciting journey so far and don’t worry, we’ve been keeping our bellies full of delicious stuff along the way.

indulge me in a quick aside about what has NOT been delicious – my final meal before touching down in londontown. i made sure to have a good last meal in the U.S. of A., (by which i mean several alcoholic beverages in the international terminal at logan airport) but my meal over the atlantic ocean was shocking in its level of inedibility. i know, i know, who expects airplane food to be good? what was i thinking? well, i’ve actually had really good food on international flights recently (tortellini on a united flight to rome comes to mind) and i obviously had some unrealistically high expectations. they were crushed to sad little pieces when i got this plate of something-sort-of-resembling-risotto-if-it-were-meant-to-be-consumed-by-humans: 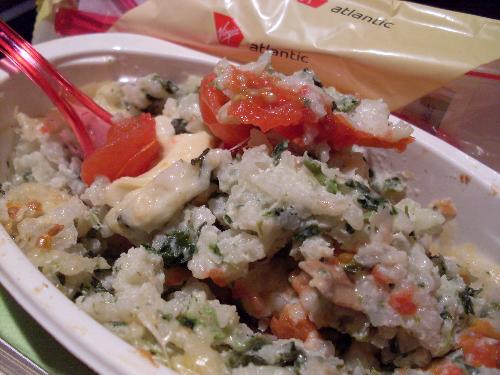 it tasted like someone had carefully minced a large cardboard box full of styrofoam packing peanuts and placed them in the microwave for several hours until soft enough to be chewed and swallowed and then coated the resulting turds with a liberal sprinkling of dirt and salt. virgin atlantic, i had such high hopes for you. however, i very much appreciate the cute little gift packages with well-designed socks and eye masks and toothbrushes all fitting into one adorable little pouch. so i forgive you. just don’t disappoint me again next time.

up next: all the good things we’ve had to eat in london! in case you’re wondering, the next post involved a meal where something caught on fire. EXCITING!

Tagged airplane food, london, what was i expecting?