1 Comment
By maxhull we made this, and it's AWESOME! - random food creations

Man cannot live on bread alone. Cake and bread, however…

Hey guys, remember the summer? Remember that one time where we all went over to Daniel’s house to make food for his birthday?  Man, that was like…four months and one day ago. What’s that?  You aren’t sure that happened?  You don’t think you were invited, or maybe your invitation was lost in the mail a la the sarcastic qualification under the “parties” section of the Gossip Girl website on the intro to the hit teen drama “Gossip Girl”?

Well fear not, for I have pictures and intend to pair them with descriptions of the evening so, cruel social exclusion notwithstanding, you can tell all of your friends that you attended.  You can watch as their eyes, usually half covered by australopithecine lids, focused on nothing in particular as though staring at a television displaying a (marginally) lower primate wearing a party hat, and arrhythmically clashing cymbals together, begin to fill with tears of envy.

Moving backwards through the evening we begin with this espresso-chocolate flourless torte.

As it happens, a lot of chocolate cake recipes call for coffee because it enhances the flavor of the chocolate without really coming through in the final product.  This would not fly.  We wanted coffee first, chocolate, you know, for texture or something…whatever.  At any rate we decided the best course of action would be to get fresh pulled shots from Gimme! Coffee. We explained calmly and endearingly that we needed roughly eight shots for our cake.  Any other human would have been charmed to the point of volunteering their assistance, and, perhaps, wallet sized photographs of their children.  Not this stone-faced barista.  If I were to try to express the pure depth of his indifference via the art of emoticonography, I believe I would employ the use of this: >:-|.  After mutilating and grafting together two recipes for flourless torte (and more than a little educated guesswork on our parts) we cut the cake’s prep time from about an hour plus “overnight” to chill, to a little under three hours total.  When that time of reckoning was nigh we piped on the happy birthday message pictured here: 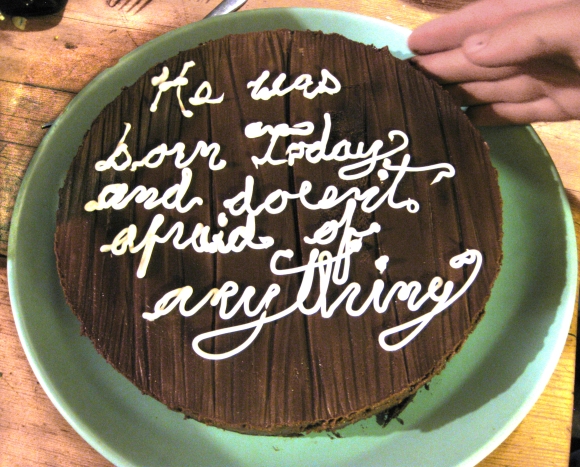 "He was born today and doesn't afraid of anything."

Picture courtesy of the "dan bartholomew is awesome" facebook group

We paused briefly to reflect on which adjectives we would use to describe the experience of eating cake…all by itself.  The decision was unanimously “uuuuuughhh boooooorrrrinnng”.  We decided to whip up (heh) some espresso meringues to go alongside the torte.

Those are coffee beans on top despite the insistence of certain parties that they “look like little deer turds”.  In case you were wondering “Is there a blurry, poorly lit photo of a slice of this cake with a couple meringues plopped alongside it with no obvious regard for presentation?”, feast your eyes on this:

There were a number of other dishes prepared for this occasion.  there are also a number (a different one) of those dishes for which I have a picture or so.  The latter number would be one.  That dish would be our attempt at the previously-posted-so-easy-I’m-never-paying-for-this-again focaccia bread.

Our focaccia was so similar to Mei’s there is really no point saying anything about it…seriously, even her picture is better.

All in all it was a pretty fun time.  Now all you have to do to be invited to the next one is befriend Serena Van Der Woodsen, or get Blair to blackmail someone.

One thought on “Man cannot live on bread alone. Cake and bread, however…”